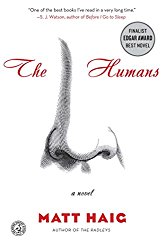 Matt Haig’s book The Humans was a breath of fresh air.  The premise was original – something increasingly difficult to pull off in an age when so many works are being published.  An alien is sent to earth, taking over the body of a mathematician, in order to thwart the advancement of the human race and erase all knowledge of the discovery said mathematician has just made.  He has been commanded to do this by killing said mathematician and anyone who he might have revealed his discovery to.  After all, humans are just too dangerous to be allowed to possess such powerful knowledge in their primitive, war-like hands – or so the alien masters of our narrator believe.

In short, the alien begins to have second thoughts about what he has been sent to do.  What follows is an amazingly original, at times intensely insightful, and very entertaining view from the outside looking in.  Through an alien’s eyes we get to see the human condition from a very unique perspective.  You won’t regret picking up this read.

Now, to the one criticism I have of this book.

I don’t know Matt Haig personally.  I haven’t even taken the time to do a reasonably easy internet search on him.  However, if I had to hazard a guess, I would say it was a safe bet to say that he’s an Atheist (that isn’t the criticism, I’m just setting it up).  Why do I make this conclusion, you may ask, and why is it pertinent to this book review?  Well, read on, dear reader, and you shall see.

The answer to the first question is that Matt presents this super-advanced alien race – a race of beings who have conquered death and learned the secret of immortality – as a race who is firmly convinced that there is no God.  This is a point that is made clear more than once in the book.  On the flip side, there is no character in the book who makes a legitimate defense for the opposing view.  In fact, it seems to be mentioned as a foregone conclusion.  The book seems to imply that any advanced being would have the same viewpoint.

Now, I could be mistaken about Matt’s beliefs (apologies if I am).  He could be an Anglican priest for all I know… but I doubt it (pun intended).  My point, and the answer to my second question of why it matters, is this.  If Matt indeed believes there is no God, it shows a surprising lack of creativity for someone who has written the most creative novel I have read in quite some time.  Really?  A man who can write about an advanced alien civilization that has discovered how to create eternal life can’t bring himself to believe that there actually could be an advance Creative Being Who created humans and promises us eternal life if we believe in Him?  Touché, Matt.  Touché.