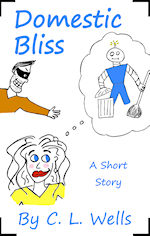 Sariah Delphi is excited to be bringing home the latest domestic humanoid robot for a test run. A robot that she helped develop, it is the most advanced of its kind. She should be blissfully happy, but her ex-boyfriend-turned-stalker, Jerry, is putting a damper on her mood. As Sariah puts her new domestic robot through its paces, Jerry becomes increasingly bold in his attempts to get Sariah to take him back. But as things get heated between Jerry and Sariah, Sariah’s new robot turns out to be a surprising ally in helping to keep Jerry in line.

Offering a futuristic and intriguing look at domestic violence, I hope you will enjoy this suspense-filled story with an entertaining twist.  Download it for FREE here.