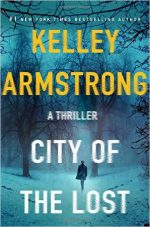 City of the Lost, by Kelley Armstrong, starts out with an interesting premise.  Casey is a police detective with a secret.  Her closest friend, Diana, has an abusive psycho-stalker ex whose behavior is making life more and more dangerous for her.  Having hopped from city to city in attempts to escape both of their pasts, they are suddenly faced with the fact that they need a better plan.  Diana’s ex finds her and beats her up, landing her in the hospital.  Someone who knows of Casey’s past secret shows up and tries to kill her, leaving her boyfriend in the hospital.  Together, Casey and Diana decide to take advantage of the nuclear option – a town no one knows about in the Canadian wilderness where those who need to get lost from society can go to escape their pasts and start fresh.

Enter the town of Rockton, the City of the Lost.  For all of its benefits, Rockton may not be as safe a place for Diana and Casey as it first appears.  For starters, Casey is allowed to come to the town in part because they have a murderer on the loose and need a bonafide detective to help find the killer.  As the story moves on, Dalton – the town’s Sheriff – and Casey don’t seem to be making much progress, and the bodies begin to pile up.  Everyone is suspect, and it even appears at one point there might be more than one killer.

The cantankerous Sheriff and the feisty Casey start off with a rocky relationship that turns into one of mutual respect as they each learn to appreciate the other’s strengths.  However, with the list of victims getting longer and the killer’s path getting closer and closer to Casey, Dalton, and Diana, will they be able to find the culprit(s) in time?

An interesting premise, interesting characters, and a generally entertaining story help move the plot along.  The author spends a bit too much time early on in the story making Sheriff Dalton out to be a grade-A jerk, ad nauseam, and it made me want to put the book down at one point for fear the rest of the story would be as repetitive and grating.  However, I stuck it out, and after a slow several chapters post Dalton’s introduction, was rewarded with the story moving on to better territory.

In a town where everyone has a shady past, there are plenty of suspects to sort through, then there is the problem that, apparently, those in charge of letting people into the town may have let more than one psychopath through in return   for some large monetary donations.  The clues seem to point both everywhere and no-where, until suddenly, one conversation (which is NOT recorded in the book) appears to help Casey figure out the whole thing.  She confronts the killer, figuring out almost everything that happened and why, within the space of a few pages.

The author, who has a background in psychology, uses her knowledge of psychology to enable her characters to have lengthy conversations about why everyone is behaving the way that they are, plumbing the psychology behind their actions and generally hitting the nail on the head.  With this sort of psychological prescience, one wonders why they don’t raise money for the town with a counseling hot-line.  In my experience, real people aren’t nearly as perceptive or accurate as some of these psychological savants, unless they are your therapist or your significant other.  The story’s conclusion was also weak.  On one page, there is not even a good suspect, two pages later, Casey has figured out even intricate relational details of what motivated the killer, exactly what they did at each point, and why – totally not believable.

If the author re-worked the drawn-out introduction of Dalton, cut out the psycho-analysis many of the characters give when observing other character’s behaviors, and gave us a more believable path to Casey’s discovery of the real killer, I would give it a 4 or 4.5.  As-is, I give it a 3.5 out of 5.